Sophronia Angelina Temminnick is the main character in The Finishing School series.

She is a human girl, around the age of 14 (at the start of the series) who lived in the English countryside prior to attending Mademoiselle Geraldine's Finishing Academy for Young Ladies of Quality, a unique school under the guise of a regular finishing school that specializes in turning girls – particularly those of a wealthy family or higher social class – into spies and saboteurs. Her love interests are Felix Mersey and Phineas B. Crow (who prefers to be called "Soap").

Sophronia is Caucasian, with straight, middling brown hair, moderately green eyes, and freckles. She smells of lemon and roses. She is described as looking more like her father than her mother. What she does not know was that her smile is more powerful than most. Although her face is not terribly thrilling, when she smiles with the full force of her personality behind it, she comes over vibrant and striking. Her sharp confidence, tall stature and green eyes draw boys towards her.

“What Sophronia did not know, and had yet to learn to control, was that her smile was rather more powerful than most. The face she saw in the mirror each morning was passingly pretty, if not terribly thrilling, but when she smiled with the full force of her personality behind it, she came over vibrant and striking.” (Etiquette & Espionage, Chapter 16)

“She had not yet received lessons in seduction, or she might have understood the appeal of sharp confidence, a topping figure, and green eyes. All Sophronia’s intellect was directed at something other than attracting male companionship. These things combined to make her particularly appealing to gentlemen.” (Curtsies & Conspiracies, Chapter 4)

Sophronia dresses in a variety of fashions. She tries to stay on top of the latest fashions, despite having exclusively hand-me-down clothes to work with. Her boots are coated with Indian rubber (see Etiquette & Espionage) in an attempt to prevent them from scuffing and to help her climb in her many adventures. She often wears a hair-ribbon, or keeps one on her person, as they tend to be rather useful. She is forced to use curling papers to curl her hair and sees it as a terrible punishment. As of Curtsies and Conspiracies, Sophronia and Lady Linette decide that she looks her best in military-inspired dresses.

Confident, loyal, will not hesitate to use dirty methods to get information. Sophronia is perfectly suited to the field of espionage, and many of its particulars come to her naturally. She also prefers to be in charge to the point of being bossy, yet has a problem with authority.

As taught by Mademoiselle Geraldine's, she prefers to be prepared for any situation, and carries the standard taught armament of sewing scissors, handkerchief, perfume, lemon, hair ribbon, and a red lace doily at all times. Aside from these items, she also carries her hurlie, obstructor, a fake mustache, a tea sachet, a chatelaine with carnet de bal, Depraved Lens of Crispy Magnification, and a small pork pie.

Sophronia was born on November 29, 1837. She is the sixth child of the Temminnick family, out of eight siblings.

There are eight siblings in the Temminnick family as follows:

In Manners & Mutiny, it is hinted strongly that Sophronia is the Aunt to Ivy Hisselpenny, Alexia Tarabotti's best friend, by way of her sister; the newly married and pregnant Petunia Hisselpenny.

Sophronia indentures her intelligencer services to the dewan in exchange for the dewan's attempt to bite a dying Soap to try for werewolf metamorphosis. One of her first jobs for the dewan is to go undercover as Alexia Tarabotti's nanny in order to protect her, through a deal made between Floote and the dewan.

At the end of Manners & Mutiny, Soap is being trained by the dewan to help in this sort of work as well. The plan is to deploy Soap and Sophronia together as field agents once Soap's training is complete.

14 years old Sophronia was the death of her mother until she was finally sent away to Mademoiselle Geraldine's Finishing School, which she later discovered was, without a doubt, a finishing school, just not the kind her mumsy thought was.

Sophronia and her friends discover a train on their way to take Sidheag home to Kingair. Overseen by Monique de Pelouse on behalf of the Westminster Hive, the train carries an aetherographer, and is tasked with tracking a Picklemen balloon that is being used to control mechanicals in various parts of Britain. Sophronia unwittingly foils the hive's operation, then stops the Picklemen.

When Soap is wounded by Duke Golborne in the confrontation, Sophronia makes a deal with the dewan to become his intelligencer in exchange for his attempt to turn Soap into a werewolf.

At the conclusion of the novel, the dewan appoints Sophronia to nanny Alexia Tarabotti and protect her from threat until Soap has enough control to act as her partner field agent.

It is revealed in Meat Cute that Sophronia organized The Hedgehog Incident. She attends the party where LordConall Maccon meets Alexia Tarabotti to arrange for Riehard to join the Woolsey Pack (and play matchmaker). She goes in the disguise of a chaperone with Soap - who plays the part of a footman.

In Changeless, Ivy Hisslepenny lets slip the possible presence of Sophronia as an adult spy. Sophronia (Ivy's Aunt on her mother's side) appears to be in the background observing the humanity crisis occurring in London. Over a meal, in conversation with the Kingair Pack, Ivy says the following: "I had heard members of the supernatural set were, well, indisposed, last week. My aunt said that all the vampires took to their hives and most of the drones were called in. She was supposed to see a concert but it was canceled due to the absence of a pianist belonging to the Westminster Hive." (Changeless, Chapter 9). Although we would do well to remember that Ivy has many aunts on her mother's side, Gail confirmed that this is an indirect reference to Sophronia.

In Blameless, after being questioned about what languages she speaks, Alexia mentions "We had this fantastic governess for a while. Unfortunately, Mama found out that she was filling my head with useful information and dismissed her in favor of a dance instructor."

Phineas B. Crow becomes pack Beta to the Kingair Pack December 1895. It is mentioned that the Wicker Chicken is leaving with them back to Scotland. Sophronia has just turned 57.

Sophronia, made up to look much older than she actually is, is present at Quesnel Lefoux and Prudence Alessandra Maccon Akeldama's wedding. She, Sidheag Maccon, and Genevieve Lefoux have tea and speak separately with Percy and Arsenic. The 'tea table of conspiracy' sends the Custard, via Percy, after The Wallflower, who is missing in Japan. It is revealed that Sophronia is the reason that Aggie Phinkerlington made her way to the Woolsey Hive in Barking to train with Madame Lefoux. Sidheag asks Sophronia for an introduction to Aggie. 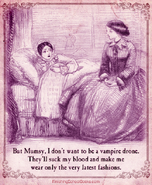 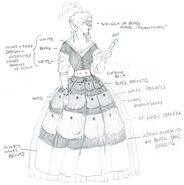 Art from the Japanese edition of Etiquette and Espionage.