A steampunk lesbian romance featuring a maid bent on seducing a brilliant scientist who’s too brokenhearted to notice. Or is she?

Imogene Hale is a lowly parlourmaid with a soul-crushing secret. Seeking solace, she takes work at a local hive, only to fall desperately in love with the amazing lady inventor the vampires are keeping in the potting shed.

Genevieve Lefoux is heartsick, lonely, and French. With culture, class, and the lady herself set against the match, can Imogene and her duster overcome all odds and win Genevieve’s heart, or will the vampires suck both of them dry?

This is a stand-alone LGBTQ sweet romance set in Gail Carriger’s Parasolverse, full of class prejudice, elusive equations, and paranormal creatures taking tea. Supernatural Society stories can be read in any order. Look for surprise appearances from popular Parasolverse characters and the occasional strategic application of cognac.

Lesbian romance featuring a parlormaid bent on seducing a certain cross-dressing inventor who is too brokenhearted to notice. Or is she?

Chapter One: In Which We Hope Vampires are Perverted

Chapter Two: In Which Inventors Have Powerful Dimples

Chapter Three: In Which Equations Prove Fruitful and Multiply

Chapter Five: In Which Things Get Perverted at Supper

Chapter Seven: In Which We Learn the Source of Vanilla

Chapter Eight: In Which There are More Dimples

Chapter Nine: In Which Werewolves Meddle

Chapter Ten: In Which We Solve All the Equations 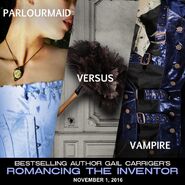 Promo for RTI
Add a photo to this gallery

"Knock as loudly as possible. If I do not answer, open the door and yell. Do not come in, wait a bit and yell again. It may take me a few minutes to realize someone is here. And if the yelling doesn't work, the fresh air and sunlight often catches my attention."(Chapter 2)

"She has dimples. I love dimples."(Chapter 2)

"Werewolves were the real gentlemen, vampires only acted like gentlemen."(Chapter 1)

"Lady Maccon, being practical, insisted on a vegetable garden, and the werewolves, being not as practical, thought flower boxes a wonderful idea."(Chapter 10)

"She was bleeding ghosts instead of blood. And she did it out of some morbid need to punish herself."(Chapter 8)

"How to explain the English Class System to a willfully obtuse Frenchwoman? Madame Lefoux had already shown little regard for the sanctity of musicians."(Chapter 3)

"I will see that little fils de pute drawn and quartered. I will guillotine his cock, I will."(Chapter 7)

Retrieved from "https://gailcarriger.fandom.com/wiki/Romancing_the_Inventor?oldid=9972"
Community content is available under CC-BY-SA unless otherwise noted.