Lady Preshea Villentia, the Mourning Star, has four dead husbands and a nasty reputation. Fortunately, she looks fabulous in black. What society doesn’t know is that all her husbands were marked for death by Preshea’s employer. And Preshea has one final assignment.

It was supposed to be easy, a house party with minimal bloodshed. Preshea hadn’t anticipated Captain Gavin Ruthven – massive, Scottish, quietly irresistible, and… working for the enemy. In a battle of wits, Preshea may risk her own heart – a terrifying prospect, as she never knew she had one.

Gail's first foray into hybrid land, romance featuring a several-times widowed Preshea and the gentle Scottish captain who could change everything.[1]

This novella takes place in the Spring of 1867, between Manners & Mutiny and Soulless. 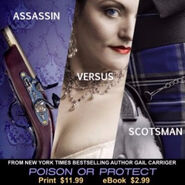 Square Ad for Poison or Protect.
Add a photo to this gallery

Retrieved from "https://gailcarriger.fandom.com/wiki/Poison_or_Protect?oldid=10163"
Community content is available under CC-BY-SA unless otherwise noted.