Captain Niall was the loner werewolf fighting instructor at Mademoiselle Geraldine’s Finishing Academy for Young Ladies of Quality. As of Etiquette & Espionage, he is described as looking about 21 years old, but we do not know when he was metamorphosed.

As a young man, Niall is tall, swarthy, and rakishly handsome in a floppy sort of way. He smells of hay, sandalwood, and pork sausages.

As a werewolf, he is rangy, with mottled black and brown fur, yellow eyes, and a puffy, white-tipped tail. He always wears his signature top hat tied onto his head, even in wolf form.

During his employment at the school where he taught military training, fighting, finishing killing, and coping with werewolves, Captain Niall met Sidheag Maccon, one of the students. When she returned to her family in Scotland—the Kingair Pack—he went with her. The dewan arranged for Niall and Sidheag to become engaged, so that Niall could more easily become Alpha of that pack. Eventually, Niall and Sidheag married and grew to love each other.

In Changeless, Sidheag claims that Niall was a loner she met abroad and brought back to Scotland to marry, only then discovering the pack in shambles. However, in Waistcoats & Weaponry we learn that Sidheag already knew of the pack break-up before her engagement to Niall. We (as yet) do not know why Sidheag changed her history, but since she also keeps her acquaintance with Genevieve Lefoux a secret, we must assume she doesn't want Alexia to know anything about her time at Mademoiselle Geraldine’s.

Niall became Alpha of the pack (although he did not have Anubis form) and remained so until he was killed while serving as a Colonel with the army's Black Watch regiment in India, about twenty years later. "The pack was ambushed during high-noon, when they were at their weakest and couldn't change shape."

In the books Edit

He is mentioned in passing in Changeless. 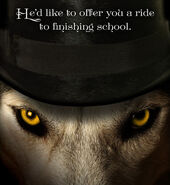 Captain Niall
Add a photo to this gallery

Retrieved from "https://gailcarriger.fandom.com/wiki/Niall?oldid=8987"
Community content is available under CC-BY-SA unless otherwise noted.