The Parasol Protectorate Wiki
Register
Don't have an account?
Sign In
Advertisement
in: Vampire, Vampire Queen, Characters,
and 3 more

Best friend of Alexia Tarabotti, Ivy Hisselpenny is "only-just-pretty" and "only-just-wealthy."[1] She marries Tunstell midway through the series (resulting in her name change) and becomes mother of Percival and Primrose. Eventually, she achieves vampire queen status as Baroness Tunstell.

Ivy is noted to have dark ringlet curls and brown eyes. She has a love for outrageous and ugly hats, which she wears often.

Ivy could be described as "quirky". Her taste in fashion is remarked upon by many as being "outrageous" at best. She is stubborn enough to not be bothered by Alexia's comments on it, or let her mind be changed very easily, either by her elders or by experts.

She is a romantic, and abandons her high society life to marry Tunstell and maintain an acting troupe with him.

She is also very protective of her children, going so far as to send vampires to Lord Akeldama's home to retrieve her daughter, despite this being incredibly rude by vampire standards. Prim finds this oppressive.

Ivy is the daughter of Mr. Hisselpenny and Petunia Hisselpenny. She was most likely born sometime in 1854.

Ivy was turned into a vampire by Matakara in Alexandria in 1876.

Ivy meets Alexia for a walk in the park, demonstrating that they are already fond friends by this time. She listens to Alexia speak of being attacked by a vampire at the ball hosted by the Duke of Snodgrove's home with shock, and she is witness to the invitation Alexia receives from Mabel Dair to visit Westminster Hive.

Ivy appears on the scene as Alexia is battling with the military members of Woolsey Pack, announcing her engagement to Captain Featherstonehaugh. Tunstell is distressed by this news, and it is revealed they have feelings for each other, but Tunstell's claviger status and Ivy's position in society makes a match almost impossible.

Ivy travels to Scotland with Alexia, Angelique, Felicity Loontwill and Tunstell. While traveling, she finds herself in competition for Tunstell's affections with Felicity, as Felicity is trying to goad Ivy, and cannot seem to make up her mind if she wishes to abandon her current engagement to Captain Featherstonehaugh to marry Tunstell or go through with the the engagement.

While in Scotland, she is held hostage at knife point by Angelique after the latter is caught trying to steal a Preternatural mummy and fails to escape on her own. She survives after Angelique is forced to let go of her by Lord Maccon and subsequently falls to her death from the top of the Kingair Pack's castle.

Ivy elopes with Tunstell at the end of the book, changing her name to Ivy Tunstell.

Ivy is not able to travel along with Alexia and her group to Italy, and maintains Chapeau de Poupe in Madame Lefoux's absence instead. While there, she comes to find she enjoys the work and inspires a new ladies' fashion with "hairmuffs".

She sends letters to Alexia during this time, one of which contained a subtle copy of Lord Maccon's public, printed apology to Alexia on the back of a rave review of her hairmuffs. This letter sent Alexia into tears of relief.

In Heartless, Ivy and her husband start an acting troupe, with Alexia's patronage. They are surprisingly well received by others, despite the individual actors' usual clumsiness.

She later gives birth to twins Percival and Primrose.

In Timeless, she travels with her family to Egypt, along with the Maccons. Primrose is mistaken for Prudence and kidnapped by the Alexandria Hive.

After being fatally wounded in a fight at the Alexandria Hive, Ivy is turned by Matakara, who subsequently dies with Alexia's help. Ivy becomes a vampire queen and new leader of the hive, and relocates it to Wimbledon.

In Prudence, it is revealed that Ivy, being so outrageous, was unable to be ignored by high society, and was therefore welcomed into the fold by receiving the title of Baroness. 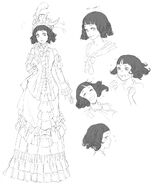 Ivy with Alexia in the Illustrated Edition of Soulless.