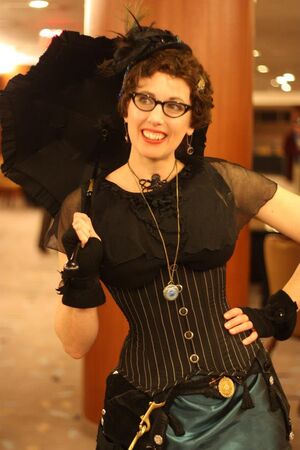 New York Times Bestselling author Gail Carriger writes to cope with being raised in obscurity by an expatriate Brit and an incurable curmudgeon. She escaped small town life and inadvertently acquired several degrees in Higher Learning. Gail then traveled the historic cities of Europe, subsisting entirely on biscuits secreted in her handbag. She resides in the Colonies, surrounded by fantastic shoes, where she insists on tea imported from London. Gail's books are published in over a dozen different languages and she received the Prix Julia Verlanger from French readers.

The Parasol Protectorate series begins with Soulless which won the ALA's Alex Award and has been turned into a graphic novel and optioned for TV. Her young adult Finishing School series begins with Etiquette & Espionage and follows the exploits of Sophronia, a young woman who discovers her dreaded lady's seminary is a great deal more than she thought. In the Custard Protocol series, beginning with Prudence, Rue and her crack (or possibly cracked) dirigible crew get into trouble around the Empire on behalf of queen, country, and tea. Gail also has a full cast audio production of her YA sci-fi Crudrat.

Countries Gail is Published In[]