She is described as looking much like her sister and mother. She is blond with blue eyes and a rosebud mouth.

In the books Edit

Felicity and her sister, Evylin, are introduced in the opening of Soulless as Felicitiy reads the morning gossip at breakfast. The two sisters spend much of the book shopping and looking down upon Alexia and her friends.

Felicity arranges to have her mother leave her at Lady Alexia Maccon's estate by throwing a fit over Evylin's marriage proposal. She does so, knowing there is a military regiment staying on the premises in hopes of catching herself a soldier. However, her plans backfires as Lady Maccon is actually preparing to leave by dirigible for Scotland. Rather than return home, Felicity invites herself on the excursion. She flirts shamelessly with Ormond Tunstell, just because she knows it irritates Ivy Hisselpenny. In the end, she encourages Ivy and Tunstell to elope. Not out of any good will, but in hopes that it will ruin Ivy's reputation and make her miserable. Once again, this plan backfires.

Felicity is the loudest voice of protest against Alexia staying with the Loontwills after she is cast out by Lord Maccon. She even leaked the information to the papers so that all of London knew she was with child. Felicity then immediately suggests/demands that Squire Loontwill eject Alexia from the home (because she is ruining her and Evylin's chances of marriage) and that the rest of the family take a European tour.

Felicity becomes involved with the National Society for Women's Suffrage. She moves into the new Woolsey Pack residence in London as a result of her mother's disapproval of the association. Later, it is discovered that she has been spying on Alexia and acting as a drone for Countess Nadasdy, and that she hopes to court Lord Ambrose.

Felicity has spent two years abroad after the events in Heartless. Her return is made evident when she visits the Chapeau de Poupe with her mother and sister. She later pays Lady Kingair a visit as the Alpha is visiting and staying with the London Pack. Felicity tells Lady Kingair about Professor Lyall's involvement with the Kingair Affair in hopes that her sister's involvement with keeping the secret will ruin her marriage. Felicity is last seen being told to leave by Biffy, who suggests she emigrate, because she'll no longer be welcome in London. 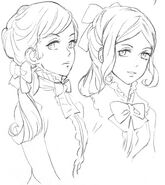 Felicity & Evylin manga sketches
Add a photo to this gallery

Retrieved from "https://gailcarriger.fandom.com/wiki/Felicity_Loontwill?oldid=10274"
Community content is available under CC-BY-SA unless otherwise noted.