An all-male counterpart to Madmoiselle Geraldine's Finishing School, Bunson and Lacroix's Boys' Polytechnique, sometimes called "Bunson's", is located in a town called Swiffle-on-Exe. They teach young men how to be evil geniuses, encouraging them to cause mayhem and build sinister gadgetry. Occasionally, both schools work together—Mademoiselle Geraldine's stops at Bunson's when repairs to the dirigibles are needed. The schools ally only so long as they can both benefit from it. After Monique de Pelouse bungles the retrieval of the prototype, relations between the two schools become slightly cooler. The school eventually wins the contract to produce the final version of this prototype, crystalline guidance valves, for the Picklemen.

Some of the school's main focuses include technology to combat the supernatural and genteel dress and manners. They punish those who do not adhere to their strict ideals of evil-doing. Bunson's is anti-supernatural and supports the Picklemen. They are a feeder school for The Order of the Brass Octopus and for the university Ecole des Arts et Métiers.

No females are allowed on the campus. This is enforced by porter mechanicals that send flames at the offending females.

The school is made is of a hodgepodge of old and new buildings, some square, some round, others completely foreign in appearance. Puffs of steam and plumes of smoke rise over its towers. Wires run between the towers, with sticks jutting outward and netting hanging from their ends. Odd lights glow in the windows.

Students earn "Evil Genius" levels for their accomplishments at the school. The levels *(from top to bottom) are: 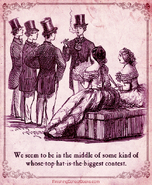