Algernon Floote serves alternately as personal secretary, butler, and personal valet for the Tarabotti family in the Parasol Protectorate Series. He is human.

Floote plays a much larger part in Blameless than in the two previous books, and again in Timeless, where his motivations are revealed.

"A nondescript man with a nondescript face,"[1] Floote appears to be an older gentleman (around seventy years in age) with weather-beaten skin and deep wrinkles around his nose, mouth, and the corners of his eyes. He is always wearing the neat and tidy uniform of a butler. He is tall in stature, with straight posture and severely greying hair. In the manga, he wears glasses. His face is usually impassive as he does not show emotion much.

Biffy described his voice as "deep and authoritative."

In Imprudence, he is described as being swathed in white, bent and frail. He looks to be about ninety years of age. When Floote becomes a ghost, he appears as a younger version of himself - possibly from the time he was valet to Alessandro Tarabotti.

Floote is quiet; having been described by Alexia as a man of few words. He can also be rather surprising at times, such as when he was found not only to be concealing guns, but had proficiency in using them while defending Alexia in Blameless.

He shows undying loyalty to the late Alessandro Tarabotti, keeping information about him secret from even his own daughter. Floote also seems to have a wealth of knowledge about both supernaturals and preternaturals, as well as the weapons used to combat them.

He has an uncanny habit of interpreting future needs and wants and seeing to them before they are requested of him.

Prior to the death of Alessandro Tarabotti, Floote served as his valet. Following Alessandro's death, he became the butler of the Loontwill residence so as to stay close to Alexia, Alessandro's daughter. After Alexia's marriage to Lord Maccon, Floote moved into the Woolsey manor and acted as Alexia's personal secretary. When the Maccons' new residence was built beside Lord Akeldama's own home, he spent time there as well.

In Timeless, it is revealed that Alessandro charged Floote with protecting the secret of the God-Breaker Plague, a mission for which Floote is willing to kill. He murders the Kingair Beta, Dubh, who discovers the plague's secret. It also becomes clear that a group in Egypt protecting the epicenter of the plague, that attacks Alexia and Lord Maccon, is working under Floote's orders. Floote disappears before Alexia can confront him about these matters.

Floote (or, most likely Floote, although never stated outright) also appears briefly in the Finishing School series in the final book, Manners & Mutiny. He serves as butler at a dinner party at Lord Akeldama's house when an engorged mechanical explodes. He appears, by the end of the book, to have struck a deal in conjunction with the dewan's Clandestine Information Act. The terms are unclear, but it is implied that Floote's former employer, Alessandro Tarabotti, had patent control over the manufacture of mechanicals. The deal released the patents to the government (which presumably destroyed the technology) in exchange for the protection of Alexia Tarabotti, then a toddler. Sophronia's first job as an intelligencer for the dewan is protecting that toddler.

In the books[edit | edit source]

Floote follows Alexia to Italy in pursuit of answers as to the nature of the child she is carrying. Armed with his Sundowner guns at his side he protects a pregnant Alexia and Madam Lefoux as they travel across the french alps. He reveals a few details out his time as Alessandro Tarabotti's valet. Finally he rescues Lady Maccon from the templars with the help of Madam Lefoux, Monsoir Trouve, Major Channing and some mechanical ladybugs.

Floote finally comes at least partially clean about his motives leading to disarray all round.

Floote comes aboard the Spotted Custard with the Drifters. He's been living with them since the events in Timeless. He, with his adopted granddaughter (Anitra) help negotiate aid from the Drifters. He stays aboard the ship and offers some insight into Prudence's family history. When the Templars attack at the end, he is shot and killed. He animates as a ghost and chooses to stay aboard the Spotted Custard in the preservation tank provided by Lord Akeldama. 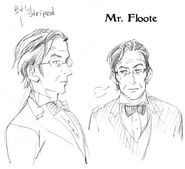 Floote Manga sketches
Add a photo to this gallery

Retrieved from "https://gailcarriger.fandom.com/wiki/Algernon_Floote,_Formerly?oldid=10262"
Community content is available under CC-BY-SA unless otherwise noted.