The Parasol Protectorate Wiki
Register
Don't have an account?
Sign In
Advertisement
in: Characters, Maccon, Alpha,
and 8 more

Alexia Tarabotti (later Lady Alexia Maccon, Lady Woolsey) is the main character of the Parasol Protectorate. She is the only preternatural in England (and first female preternatural in seven generations), and wife to Lord Conall Maccon, Alpha of the Woolsey Pack.

Alexia is daughter to the infamous (and dead) Alessandro Tarabotti, and the not-at-all infamous (and still quite alive) Mrs. Loontwill. After her marriage to Lord Maccon, she is appointed to the position of muhjah by Queen Victoria.

At the start of the Parasol Protectorate series (1873) Alexia is a 26-year-old spinster.

Her features are repeatedly likened to her father, who is from an unknown part of Italy. We can guess that he is from the south, though, because her features are described as 'strong', her hair is dark and curly, and she has olive skin, a prominent nose, and dark eyes. It is stated on many occasions that she is rather tall, being not much shorter than her husband, and that she has a volumptuous figure, with a large chest.

Being a preternatural, her usual style lacks soul. She later makes up for this by having a French maid, which ultimately turns her into a trendsetter for her peers. Later on in the series, Biffy becomes her personal stylist. She always carries a parasol, and by quite early on in the series, it has hidden weaponry useful against machine, vampire, and werewolf alike.

To the sensitive supernatural nose, Alexia smells of cinnamon and vanilla.

Alexia's personality is described as no-nonsense and blunt, though it shows itself to be far subtler and more sensitive than Alexia thinks, especially in Soulless. Believing that she has a lack of 'natural morals' that would be provided by a soul, Alexia seems to have taken manners as a substitute, and treats rudeness and impropriety the way some treat immorality. Perhaps because of her home life, once out in the world, Alexia gains a bit of an autocratic streak, and it's obvious she doesn't like feeling out of control.

She was born in 1847 to Alessandro Tarabotti, an Italian preternatural infamous for his racy life-style (see him fully realized in Gail's e-story: The Curious Case of the Werewolf That Wasn't, the Mummy That Was, and the Cat in the Jar), and Mrs. Loontwill. Her father died shortly after her birth and left her his valet, Floote. At some point during her early childhood, she was visited by 'a werewolf specialist' from BUR, who explained to her her soulless status. She has read a great deal of philosophy in reaction to being told she has no soul (and therefore no moral compass), and in the first book it's made clear that she was raised in an abusive environment, which shaped her self-image drastically.

At some point, prior to the events of Soulless, Alexia was involved in something called The Hedgehog Incident, which has never really been elaborated upon, though it is implied that there is some doubt as to whether or not 'it' was her fault.

At the end of the events of Changeless, Alexia discovers that she is pregnant. Alexia and Conall have a daughter in 1874, Prudence Alessandra Maccon Akeldama.

Alexia becomes mixed up in a plot by the Hypocras Club, a group of militant scientists interested in discovering how to limit the power of supernaturals. For her role in stopping these scientists, Queen Victoria appoints her to the Shadow Council as muhjah.

She becomes involved in a relationship with Lord Maccon, who proposes to her by the end of the novel.

When Lord Maccon hears about the death of Kingair Pack's Alpha, he rushes off to the Highlands to see after his old pack. Meanwhile, a curse turning supernaturals human has affected London. As Muhjah, she is tasked with discovering the mortal-afflicting source. Alexia learns it is headed in the same direction as her husband. So she follows him north with her maid (Angelique), claviger (Tunstell), sister (Felicity), friend (Ivy), and acquaintance (Madame Lefoux) via dirigible. In Scotland, she meets Conall's descendant Sidheag, and discovers the source of the humanity plague also affecting the Kingair Pack. She ends the curse, convinces Conall to turn his great-great-great granddaughter into a werewolf, then learns that she is pregnant.

Alexia is back at home with the Loontwills having left her husband's house after the discovery of her pregnancy. Since immortals cannot have children, there is quite a scandal. And, once again, some unknown person or persons is trying to kill her - which turns out to be the vampires. They fear what her child may one day become. She decides to go to Italy to find someone who can help explain her current infant-inconvenience. With Floote and Madame Lefoux, Alexia goes to seek out the Templars. There she learns more about how the Templars treat preternaturals as well as her own father's past. Conall finally comes around and, after sending Channing ahead to guard her, admits that the child is his own and goes to retrieve Alexia.

She and her husband attend a dinner at Woolsey Castle with Major Channing. She then takes on Imogene Hale to protect her from Countess Nadasdy and helps Imogene in her pursuit of Madame Lefoux.

Lady Maccon is consulted by Lord Akeldama and Prudence about the quality of tea the vampire is considering going into a business venture over in India. She also has a discuss with Lord Maccon about his impending "retirement."

Prudence first finds her mother sitting in Lord Akeldama's discussing the state of her husband: Lord Maccon. The strain of keeping him under control from the alpha madness has become too great. So Lady Maccon and her husband travel with Prudence to Egypt so they can live the rest of their lives in the God-Breaker Plague zone. 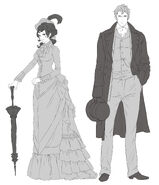 Alexia defends herself against a vampire. Art by Jensine Eckwall.

Ivy with Alexia in the Illustrated Edition of Soulless. Art by Jensine Eckwall.