The Parasol Protectorate Wiki
Register
Don't have an account?
Sign In
Advertisement
in: Vampire, Characters, Shadow Council,
and 5 more

Lord Akeldama is a major character in the Parasol Protectorate Series, the Finishing School Series, and the Custard Protocol series.

A rove vampire of London, Lord Akeldama is one of the oldest vampires in London (and possibly the world). A shrewd gatherer of information, Akeldama prides himself on two things: his fashion, and knowing everything. He is attended in these goals by a large number of dandy drones, many of aristocratic blood.

Lord Akeldama is close friends with Alexia and the adoptive father of Prudence Maccon. He was patron of Preshea Buss and Agatha Woosmoss.

His creator was Queen Matakara. He was born a human as Alexander the Great, ruler of the Macedonian Empire.

Lord Akeldama is blond[1], with a pixie face[2] and fangs that are 'like the perfect dress sword... quite subtle fangs for a man of [his] reputation'[3]. This seems to imply that his fangs are small and delicate, though they are also described as very, very sharp.[4]

An admirer once described him as having "the face of Ganymede on earth."[5]

He is known as the leader of fashion, and his personal style is flamboyant and foppish, with lace, ruffles, and daring haute-couture such as brocade gloves and three-inch heels.[6]

"Outrageous was a very good way of describing Lord Akeldama."[7]

Despite his colorful appearance and flamboyant personality, he is a shrewd vampire that keeps tabs on any and all information he can get his hands on, which is mostly reported to him through his drones. He has also expressed compassion, sharing this information with Alexia, and warning and protecting her—presumably even before his first appearance in Soulless.

He was "created" by Queen Matakara, who was the oldest living vampire before her death. When or where Lord Akeldama was born or when his metamorphosis occurred is left ambiguous in the series. Rue suspects he may be Greek in origin, and Gail Carriger has confirmed that he is Alexander the Great.[8] Akeldama confirms this for Rue in Imprudence.

He became sick with a fever[9], and as the real-world Alexander died of this fever, it is the most likely timing for his metamorphosis.

He has a longstanding dislike of Countess Nadasdy.

Lord Akeldama is a gay man, and for much of the Parasol Protectorate series is in a relationship with his lead drone, Biffy. He expresses sadness and regret at Biffy's ultimate fate.

Biffy believes that Akeldama's love is "always transient and shared", meaning he is not inclined to settle down with a single lover for a length of time. He believes this is done to to protect Akeldama's heart, after seeing so of his many lovers die.[10] This may also be an in-period way to phrase and rationalise Lord Akeldama simply being polyamorous.

Lord Akeldama meets Sophronia, and afterwards shows some interest in her abilities as an intelligencer.

Lord Akeldama continues to court Sophronia in a professional sense, sending her small gifts on occasion.

Lord Akeldama is revealed to have been the patron of Agatha Woosmoss for her entire school career, explaining that her great amount of wealth is from him and not her father.

He takes in Soap and Sophronia at the end of the novel. He provides them with shelter and medical attention in exchange for information.

Lord Akeldama arranges the meeting between the Duke of Snodgrove and Lady Preshea Villentia (née Buss). He also facilitates hiring Lady Villentia to protect the Duke at his own party from assassination by offering her the information she needs to destroy her father.

Sometime in their history, he and Alexia became good friends, and Alexia sometimes came to Lord Akeldama for advice, particularly when it involved the supernatural. Alexia first reaches out to Lord Akeldama in Soulless after getting an invitation to the Westminster Hive.

Out of fear for her safety, Alexia also arranges to spend the full moon at Lord Akeldama's residence. Despite the precaution, both he and Alexia were kidnapped by the Hypocras Club. The scientists attempted to drain him and create a new vampire, but he was rescued by Alexia and Lord Maccon, helping them defeat the automaton once he was freed from his bonds.

At the beginning of Blameless, Alexia is hoping to stay with Lord Akeldama (rather than her bothersome family) since she has been forced to quit her husband's house. However, when she arrived at his doorstep he was gone. Lord Akeldama had been forced to swarm when his favorite drone - Biffy - had been taken by the potentate. He'd left Boots behind to give Alexia a very subtle hint: "Leave England. And beware of Italians who embroider."

Lord Akeldama returns at the end of the novel to find Biffy transformed into a werewolf. And with the death of the previous potentate, Lord Akeldama is made the new one.

A BUR file containing scant information on Lord Akeldama is in the opening prologue for Heartless.

The novel opens with Lord Akeldama, Lord Maccon, and Professor Lyall trying to convince Lady Maccon that allowing Lord Akeldama to adopt her baby was the best way to help ensure the safety of everyone involved. They are finally able to convince her that with his position as potentate and the local hives owing him a blood debt for the kidnapping and subsequent loss of his drone, Lord Akeldama was in the best position to protect Alexia's child, but she insists on moving in as well. They devise a plan to move part of the pack into the neighboring home to keep up appearances.

Lord Akeldama is then involved in the investigation of a potential threat against the Queen in his position as potentate. With his help, Alexia uncovers that Professor Lyall was behind the Kingair Affair.

When the true plot against a queen was discovered to be Countess Nadasdy, Alexia tried to save her by having her swarm. Lord Akeldama refused to allow her to swarm to his home, or else he would have lost it - forcing Alexia to bring the hive to Woolsey Castle. This had the advantage of getting Lord Akeldama's greatest rival out of London.

Timeless opens with the antics of trying to give toddler Prudence a bath, which resulted in her accidentally touching Lord Akeldama.

Shortly thereafter he helped entertain the visiting Lady Kingair to report the death of her beta: Dubh. During which Prudence touched her and took off down the street as a tiny wolf, making a scene of the neighborhood.

The next evening Lord Akeldama and his drone, Tizzy, took Prudence for a stroll in the park. Afterwards, Alexia consulted him on the summons from Queen Matakara in Egypt. This was when Alexia guessed that Matakara was the vampire that had transformed Akeldama. He gives his blessing to let them take Prudence to Egypt and later sees them off for their trip.

Lord Akeldama sends his adopted daughter, Prudence, on a secret mission to recover a sample of tea. With that sample of tea, he sends her off in her very own dirigible to India to explore the possibility of growing and importing this special kind of tea.

Lord Akeldama is in a serious conversation with Lady Maccon about the state of Lord Maccon at the beginning of Imprudence. After Rue learns about the reality of her parent's current situation with Lord Maccon suffering from alpha madness, Lord Akeldama comforts his adoptive daughter - even revealing his true age. It is later discovered that Lord Akeldama is the person who commissioned the preservation tank aboard the Spotted Custard specifically for Floote.

In the epilogue, Lord Akeldama reveals that both known metanaturals, Zenobia as well as Rue were his daughters, and that Zenobia is the miracle child of the first Tarabotti, a werecat and himself. Lord Akeldama says in an excerpt of his memoirs, "...A man who made miracles with his touch, and a shifter who adored us both beyond reason. ...[T]hat first Tarabotti, who had both me and a werecat in his bed. And we made a miracle child who became a Queen and a legend. Zenobia, our daughter. The first metanatural."[11]

“The other gentleman was Lord Akeldama – an undersized absurdity, all pompadour and no circumstance. He sported a monocle he didn’t need, an accent not his own, and an attitude forever tempting disregard. He was also the deadliest creature Preshea knew.”

Lord Akeldama and Biffy have their final goodbye amidst the chaos of new kittens being brought into the house after Madame Pudgemuffin's passing. He is also the first place Professor Lyall goes when he realizes the London Pack has moved.

Lord Akeldama pays a visit to Bertie while Sir Crispin Bontwee is there. Crispin then tries to send actor, Cinjin Theris, to Lord Akeldama in hopes that he'll leave the Nottingham Hive, but Lord Akeldama refuses him. 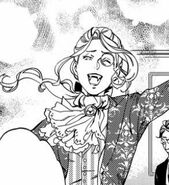 'How delightful of you to invite me to dinner, darling!'

Partaking of Alexia's preturnatural abilities to make a point.

Expressing fear and shock when faced with the Hypocras Club's automaton for the first time.